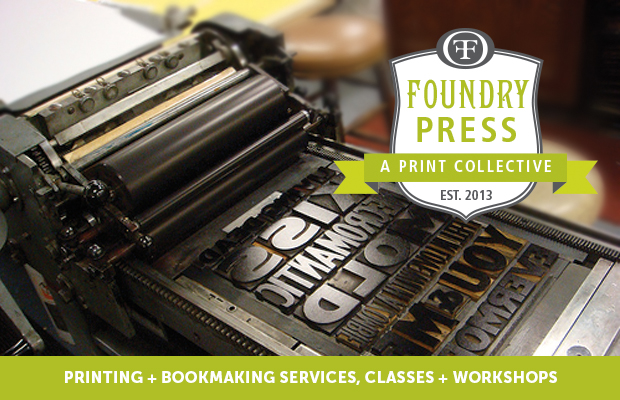 COHOES NY—The Foundry for Art Design + Culture, Cohoes New York announced today the launch of their latest cultural enterprise—Foundry Press, A Print Collective. Housed in the long underutilized annex of the Cohoes Public Library, Foundry Press will provide letterpress printing and bookmaking services, classes and workshops, open studios and tours with the goal of furthering the craft of traditional printing and book arts.

Letterpress printing is the art of relief printing using a printing press and dates back to the mid-15th century. It involves composing and locking movable type into the bed of a press, inking it, and pressing paper against it to form an impression. “It is highly sought after for printing upscale invitations, stationery, and fine editions of books.” said Alana Sparrow, Principal Founding Artist at the Foundry.

The letterpress collective is the latest cultural economic and educational opportunity created by the Foundry, but Sparrow, notes, “This initiative is unique in that it is the first of it’s kind in the capital region. Designers and individuals seeking this artisanal service have often had to go outside the region. By providing artists, designers, students and the public at large access to these handcrafted services and educational opportunities we not only further this beautiful craft, but will make notable contributions to the regional economy.”

This initiative has been a long time in the making and began in 2007 when the organization was donated a Vandercook press along with a large type collection. Initially, the principals thought the equipment would be housed in their Remsen Street facility, but space constrictions prevented that. It was the former Mayor John T. McDonald who proposed the location at the library just prior to the end of his term this past fall. “It’s a perfect location logistically and is a wonderful complement to the library.” noted Sparrow.

Currently, they are joined by Jeremy Chapline of Ink Plate Press and will bring in two other printers. They are in the process of setting up the printing and book arts studio facility which includes a Vandercook cylinder press and several Chandler + Price Craftsman platen presses, wood and lead type collection, finishing and book making equipment. A grand opening will announced at a later date.

The Foundry for Art Design + Culture strives to support access to exhibition, performance, educational and lecture opportunities to creatives working in all sectors of the creative industry, thus supporting the local economy. The Foundry believes that preserving cultural heritage strengthens the cultural, educational and economic vitality of local communities.