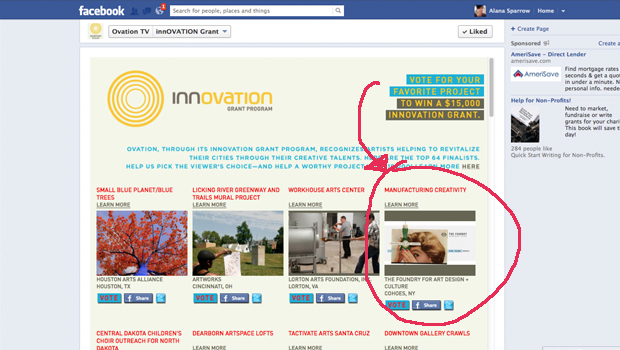 The Foundry for Art Design + Culture has been nominated to receive a $15k Ovation TV innOVATION Grant. The innOVATION Grant Program is a product of Ovation TV and Americans for the Arts organizations. Ovation developed the innOVATION Grant Program to fund and recognize the impact of artists and the arts in communities’ revitalization efforts. As part of this program, $15,000 will be granted to the organization who captures the hearts and the most votes in Facebook voting opening on October 15, 2012.

The Foundry for Art Design + Culture, now in its 2nd year of operating full-time, is fast becoming one of the region’s most noted organizations for economic and community development through the arts. The organization fosters innovative collaborations between creatives, cultural and educational institutions, non-profits, businesses and civic institutions. Their scope includes services to artists and arts organizations, property owners, developers, businesses and residents throughout the area. Should the project be chosen the winner of the innOVATION Viewer’s Choice Grant, Foundry Principal and co-founder, Alana Sparrow, states “the funds would be utilized to develop Creative 4Hire, an online job board designed specifically for creative professionals to connect them to NYS’ capital region cities, companies and individuals that want to hire them.”

To qualify for consideration, each organization was required to be nominated by a local city official. Mayor John T. McDonald III sponsored the nomination and states “The Foundry is an innovative project with art at the center, and as artists, curators and business people, they have single handedly developed one of the premier community-building arts spaces in New York’s upstate capital region, and the city of Cohoes has directly benefited from an economic and revitalization standpoint. Their project plays a critical role in the revitalization and economic growth of our community, and their ability to connect artists to their neighbors, businesses and community is surpassed by none.”

The Foundry for Art Design + Culture is the only organization representing the capital region in this program and one of only four representing the state of New York. Voting opens on Monday, October 15, 2012 and extends through the end of the year concluding on December 31, 2012. The winner will be announced in January 2013. To vote, you must have a Facebook account and “like” OvationTV.  Voting can be found at Ovation TV’s Facebook page.